UMGC Professor Carl Berman spent four months teaching oceanography aboard a floating university as part of the Semester at Sea program. This is the last of three stories that follow his experience.

One person can make a difference.

That was the message that Carl Berman, a University of Maryland Global Campus (UMGC) professor, tried to impart to students on the academic ship MV World Odyssey. Berman was among the 26 faculty members—from a range of academic institutions—who spent four months teaching aboard the floating campus this past fall in the Semester at Sea program sponsored by Colorado State University.

As the Semester at Sea Braun-Glazer Oceans and Sustainability Scholar, Berman focused his lectures on ocean awareness and sustainability. He was one of four faculty members teaching the Global Studies Program, a requirement for all of the more than 400 students aboard.

“For an oceanographer, a four-month voyage, especially to waters with which one is unfamiliar, is always an enlightening experience,” Berman said at the end of December when he was back on terra firma at his home in Austin, Texas. Even more, he found himself part of an interesting ship’s community.

“There is a strong bond formed between the students and their professors which I, perhaps, did not realize until our emotional good-byes occurred in San Diego,” Berman said. “This development of a ‘family’ aboard the MV World Odyssey was one of the highlights of the experience for me.”

While at sea, Berman gave 10 oceanography-focused lectures as part of the Global Studies Program, taught other courses via 80-minute lectures every other day, and sometimes led his students on shore-excursions. 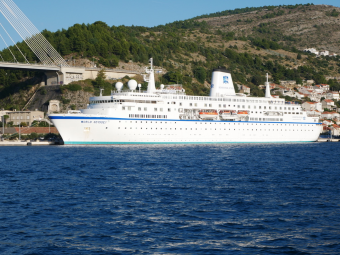 On a port call in Lisbon, Portugal, for example, he took his students on a class study trip.

“It included a visit to the local aquarium—one of the best in the world, a fishing village where they were introduced to the world of artisanal fishing, and they had a tide-pooling expedition at a local beach,” Berman said.

Semester at Sea shore experiences were divided into two categories: required field classes and optional field programs. Berman’s marine-focused expeditions, like the Lisbon study trip, were field classes, and his students kept journals of their experiences and what they learned. The field programs were “slice of life” experiences, Berman said, that exposed students to local residents, their lives and their philosophies. Field programs included cooking classes in local homes while in port, an overnight in the Moroccan desert, and a trip down the Amazon River. 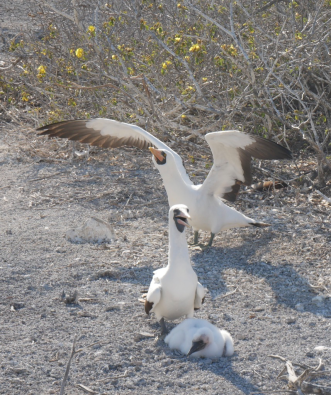 “We were also treated to views of pilot whales and, toward the end of the voyage, the giant of the sea, the blue whale,” Berman said.

The majesty of the seas was evident through the months of sailing. So was something more insidious: plastic pollution in every sea they visited.

“This problem continues to grow and threaten the marine ecosystems around the world,” Berman said. “Even in the Galapagos Islands, where there are stringent regulations against the disposal of waste, we found plastic water bottles washed up on the beaches.”

Aboard the World Odyssey, Berman lectured on threats to the ocean, from the effects of overfishing and deep-sea fishing to the ways mining threatens the world’s oceans. His goal was twofold. He wanted to introduce students to these world ocean problems and to increase awareness of how one person can make a difference.

“Their end-of-the-term video presentations demonstrated that I had made my point,” he noted.

The Odyssey’s journey, which began in Amsterdam, took Berman and his students to Europe and Africa before heading to the Americas where they visited Brazil before sailing through the Panama Canal, toward Ecuador, and up the Pacific coast to Costa Rica and then California. Berman said his temporary home—a 1990s ocean liner outfitted with marble and brass, red velvet chairs, and Art Deco features—was comfortable and the cafeteria-style meals served in two dining rooms were good. The biggest challenge was the intermittent Internet service aboard the ship. He frequently caught up on email and other e-obligations while in port. 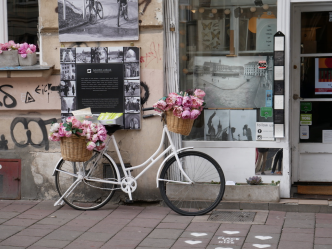 The ship set sail on Sept. 6. Twelve ports later, it docked in San Diego—two days before Christmas. Berman and his wife, Joyce Gioia-Herman, an entrepreneur who taught a business management course for the Semester at Sea program, are seasoned travelers. But the journey took them to places they had never been before, including Morocco, and offered off-the-beaten-track experiences with local residents.

“An introduction to life in remote and sometimes exotic destinations helped to form my opinions about life in these lands, the culture of the people involved, and the realization that all of these world views have value and are worth experiencing,” Berman said. “In spite of the fact that I have traveled widely, I can’t equate the impact of the Semester at Sea experience with any other journey I’ve undertaken.”

Berman expected the face-to-face teaching on the Odyssey of the Seas to be a different experience from the online instruction he conducts at UMGC. But he wasn’t ready for how all-encompassing it would be. And he expects some of the lessons he learned while teaching aboard ship will shift the way he teaches meteorology at UMGC this spring semester. For one thing, he plans to give his students the option of submitting video presentations in lieu of papers. He also expects to push their engagement to a higher level through lively discussion.

Berman said intense day-to-day contact aboard the ship also made him more aware of the issues confronting students, including those at UMGC.

“Being a faculty member in the Semester at Sea program means that you not only meet with the students during class time, but you see them throughout the day,” he explained. “You pass each other in the corridors of the ship or on deck, have office hours … and, on occasion, even share meals with them in one of the ship’s two dining rooms. The students can also be participants in field programs and shore excursions which, as a faculty member, you may either be leading or taking part in as a traveler.”

Berman said all this activity meant he learned about his students—their personalities and their problems—and what they thought about “life in general.” He enjoyed the close-up interaction and is thinking about ways to weave in that personal connection back at UMGC.

“I hope to interact as much as possible with the ‘whole’ individual when I am back teaching online,” he said.

Berman recommends the shipboard teaching experience for UMGC colleagues. “The almost four-month voyage changes and enriches your life in ways you never thought possible, including by opening your minds and hearts to colleagues and students,” he said.

Details on Semester at Sea can be found at SemesteratSea.org. Berman also welcomes students and faculty to contact him at 240-401-7727 or ruldomo@gmail.com to learn more about the program.

Cover photo: Berman and students on a tide-pooling expedition at a local Lisbon, Portugal, beach