UMGC Professor Carl Berman is spending four months teaching oceanography aboard a floating university as part of the Semester at Sea program. This is the second of three stories that follow his experience.

Carl Berman joined his students outside to watch a dramatic meteor shower against an otherwise inky sky. It was an unusual undertaking for a professor of oceanography, even more so for where it occurred: on a ship near the coast of Africa.

“Some of the outside lights of the ship [were] turned off so that we could see the sky,” Berman said. “The Milky Way stood out … and meteors streaked through the sky in the constellation Orion.”

Berman, a University of Maryland Global Campus (UMGC) professor of biology, is one of the more than two dozen faculty members currently aboard the World Odyssey, the academic ship that set sail Sept. 6 from Amsterdam to navigate the globe for the Semester at Sea program. The late October meteor shower occurred at the midway point of the voyage as the seafaring classroom left Morocco en route to Ghana.

Berman, the only Semester at Sea instructor from UMGC, said the earliest days of the voyage were a scramble to master the technology systems aboard the ship and get used to the intermittent Internet service. These days were also his opportunity to meet his students, young and old.

“Most of the students we have aboard ship are juniors and seniors in college,” Berman explained. “We do have a few ‘gap’ students who have graduated from high school but have not yet started at a university and a few college graduates.” Semester at Sea offers 30 for-credit undergraduate courses through Colorado State University.

The professor noted that the ship also carries a demographic familiar to UMGC: lifelong learners. These older adults, often retirees or professionals on leave, come aboard in ports for short legs of the voyage.

“They are free to attend the classes of their choice and take part in the discussions,” Berman said. The World Odyssey began its journey with 50 lifelong learners. On the sailing from Morocco to Ghana, when Berman checked in with the UMGC Global Media Center to report on the progress of the voyage, there were 18 aboard. 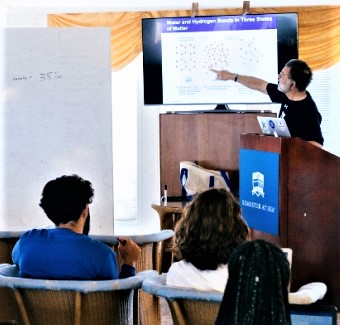 Berman teaches oceanography, but he also is one of three professors jointly teaching Global Studies, the only course mandatory for all 408 students aboard the ship. One of the three professors lectures on the history of every country the ship visits while another discusses culture. Berman addresses each country’s relationship with the ocean.

Berman said the Semester at Sea students remind him of the UMGC students he has taught online for years—curious and motivated. Where they diverge is the sense of community that is fostered when teaching daily and face to face.

“There is daily interaction with all the students … I am known to everyone and am greeted all day in the passageways by students who just want to say hello or who have questions about classwork or the marine environment in general,” Berman said. “This is far different from teaching in a regular university where you may see your classes two or three times a week.

“This experience is truly one of community,” he continued. “There is a family atmosphere between the faculty and staff—collectively known as the ‘staculty’—and the student body.”

“My role is to develop in the students a sense of stewardship toward the ocean, the living and non-living marine resources in marine waters and the quality of the ocean ecosystem as a whole,” he said. “I am surprised and pleased by the questions I receive and the extent to which the students enter into the discussions.”

A recent example of that interplay came after a lecture on fisheries. A student approached Berman to ask if the fish served in the ship’s dining room came from renewable sources.

“Now, that was a question that I had not considered,” said Berman, who is currently researching the answer.

Berman and his students have spotted dolphins and flying fish, although “no whales or other megafauna have been seen thus far.” But, Berman added, “we still have half of the cruise to go and a lot of ocean to cover.”

The full voyage includes 12 ports and a Panama Canal transit before it ends in San Diego on Dec. 23.

As of late October, it had been smooth sailing, except for brief rough seas that sparked a short-lived bout of seasickness among passengers in the Bay of Biscay in the northeastern Atlantic Ocean. There was also an emergency stop to allow divers to check propeller shafts after the ship’s engineer feared they had picked up debris. The interruption was brief.

Berman noted that not all the learning takes place aboard ship. During port calls, there are often lectures by local experts. There are also educational expeditions in and near the ports. So far, the ship has docked in Bremerhaven, Germany; Amsterdam; Lisbon, Portugal; Cadiz, Spain; Dubrovnik, Croatia; and Casablanca, Morocco.  Berman said the port experiences that most affected him were a visit to Krakow, Poland, and connected trips to the Nazi concentration camps at Auschwitz and Birkenau, which are now preserved as museums dedicated to the victims of the Holocaust.

“This tour was [a] deeply moving and sobering experience for both my wife, Joyce, and myself and is a journey that everyone should take should the opportunity arise,” Berman said.

One of the most unusual port expeditions during the first half of the voyage program involved an overnight in the Sahara. “We traveled over the Atlas Mountains and then spent an hour on camels riding to our campsite in the desert, where we spent the night,” Berman said. The group’s Berber hosts provided dinner and entertained them with music and dancing during a memorable evening.

“The sky was bright with stars and the Milky Way was in evidence in the black velvet dome of the night,” he said.