The enormous, four-story lobby of the U.S. District Courthouse in Greenbelt, Maryland, isn’t the kind of place where one would expect to find art exhibitions. Walking by rooms identified on plaques as bankruptcy courts, one is even more surprised to see bright, colorful paintings. But that’s kind-of the point, said Peter J. Messitte, a senior U.S. district judge.

“People engage with the art during what could be stressful proceedings, and they’ll come out, walk around, and look and see,” the judge said at the opening for “Ruth Channing’s Community in Paint and Print,” a joint exhibition with UMGC. “For me, the most impressive thing is when the security guards start to argue about whether a painting is too abstract. The question is, does it reach you, and if so, how?”

Messitte said he preferred some of Channing’s less representational works from among the 40 pieces on view, such as “Black Lace Mom and Baby” (2001). He said his daughter owns a gallery in New York and he knows that artists are often starving for venues to exhibit their work, which is why, when the court moved into its current building in 1994, he favored adorning the walls.

At the U.S. District Courthouse, Greenbelt, the lobby doubles as art exhibit space

“We have these white walls that are circular. What do you put there?” he said he asked himself at the time. “My thought was, why not put some art on the walls? You don’t have to be Picasso. You just need to be a good amateur artist.” 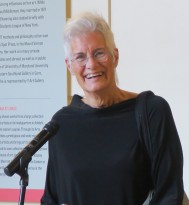 Artist Ruth Channing, who was also on hand at the preview, had been previously unfamiliar with the courthouse space. “I thought that was weird,” she said in an interview on hearing her work would be exhibited in a courthouse.

“At first, I was picturing the Baltimore courthouse, because I live in downtown Baltimore and I went for jury duty every year until I was 70. I was not expecting it to look this good. This building is fantastic.”

Channing was surprised that the show, which was selected from works that remained in her studio, included pictures depicting a skeleton (“The Fundraiser,” 1995), a woman in a bra (“Dominique,” 1991), and someone with a star tattoo in a sensitive place (“Lulu with Star Tattoo,” 1996). “I think it is a very daring selection,” she said. 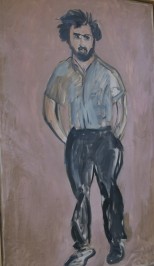 In her public remarks at the opening, Channing noted that the remaining pictures in her studio—many of which she donated to UMGC—largely depict her family. “Raoul Standing” (1971) depicts her husband Raoul Middleman, himself an artist, who has shown his works at UMGC and gifted works to the university. She described the work as “the angry-looking guy on pink.” The two had just gotten married that year.

The adjacent painting, dated 1992, “Nate in a Plaid Shirt,” portrays one of her teenaged sons against a bright yellow background. “I would never see it like this. This is wonderful for me,” she said of viewing the two canvases, separated by two decades, installed side-by-side. “They’re really a family album.”

As a painter, Channing is largely self-taught, and she counts post-Impressionist artists like Amedeo Modigliani (1884-1920) as influences. “I wanted to elongate and to show the beauty,” she said. (The Italian-Jewish artist Modigliani often depicted his models with elongated features.) In Europe, Channing trained as a printmaker, and the UMGC show includes some of her etchings and engravings that date between1984 and 2018. In her printmaking, Channing drew inspiration from and studied the techniques of Renaissance and pre-Renaissance artists, including Albrecht Dürer (1471-1528).

In his remarks at the opening, Eric Key, director of the UMGC Arts Program, said that the university has collaborated on exhibitions with the courthouse throughout his 11-year tenure. “Every year we try to select an artist—some emerging, some established—and what we want to do is expose our art to people who might not come through our doors at UMGC,” he said. Channing has been a friend of the university’s art program for as long as Key can remember, he added. 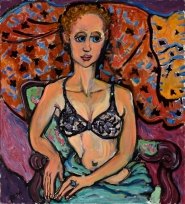 “Ruth is a Baltimore native. She is a printmaker. She is an artist. She is a mother, and just as importantly, she is a friend of the arts at UMGC,” Key said. “She’s never turned her ear away from anything I’ve asked of her. I asked her to curate an exhibition, which she did. I’ve asked her to support her husband and to answer many questions which we had for the catalog, which she did. I asked her to donate some works for the collection, and she’s done that. And now we have a show of those works.”

When Channing came up to the microphone, she spoke briefly and humbly. But anyone who even glances at her works in that enormous courthouse space, and more so those who spend some time giving them a closer look, will see that Channing’s art is about as bold and powerful as paint on canvas can be, and many works look just about ready to leap off the walls.