Ann Darrin is about as much of a pioneer in engineering management as the Parker Solar Probe spacecraft that is now “flying” around the sun or the New Horizons spacecraft that transmitted photographs of Ultima Thule, an object in the Kuiper Belt a billion miles beyond Pluto, on New Year’s Day.

She was raised at a time when women were actively discouraged from studying engineering or the sciences. Now she is the managing executive of the Space Exploration Sector at the Johns Hopkins University Applied Physics Lab (APL.) She leads about 700 engineers and scientists who design and fly some of NASA’s most complex and innovative missions.

And she has done it all with the help of a University of Maryland University College master’s degree in technology management. 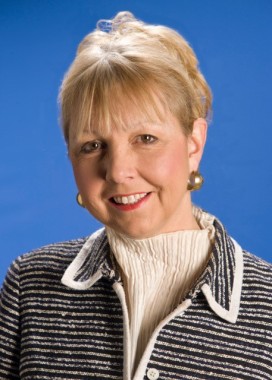 The Daily Record, Maryland’s business, law and government newspaper, this year named Darrin one of the state’s 57 influential leaders, citing her expertise in aerospace and systems engineering management.  In her 20 years at APL, she has worked on dozens of spacecraft and specialized instruments that have been sent to explore every planet—and now the sun.

But getting accepted in the male-dominated industry wasn’t easy.

“I can tell you I have been patted on the head, called ‘little girl,’” she said. “When I was younger it was pretty rough. At times it was very difficult.  It’s gotten a lot better and I have had very positive experiences at APL.  NASA has also been a leader. We are in a better place. But after working as a woman in a male-dominated field, you end up with a good sense of humor. At times you laugh and say, this is ridiculous.”

That’s why she now advocates for women and minorities in the engineering and science fields, creating an internship program to encourage their interest and acceptance.

Darrin said she always had an interest in engineering, even as a young child raised by her college professor father after her mother died. Her father was a civil engineer and they moved around the country as he pursued his academic career.

Born in 1954, she came of age at a time when women did not consider engineering careers.  “My college advisor in high school was really sending me to college to get an MRS,” she said.  “They suggested I get a four-year nursing degree, so I could pick up a doctor.”

Such perspectives made Darrin less than interested in her Penn State studies, and she graduated with a liberal arts degree, although she excelled at statistics.  After graduating, she found a federal program that allowed her to take a test to become a quality engineer, which qualified her to get a position with the Department of Defense as an industrial specialist.

In time, she did get her MRS, and three children followed within five years.  As her husband rose in his career, they moved from city to city, and Darrin became what was known at the time as a “trailing spouse.” Five states, five new jobs in 10 years—and she had to find a new job in each new location. She took night courses in engineering and was accepted to graduate school in electrical engineering.  But another move was imminent.

In Boston after a fourth move, she landed what she considered an ideal job as quality assurance manager for M/A COM Semiconductor division.  Yet within a year, her husband announced they were moving to the Washington, D.C. area. She struck a deal.

“If you are making me give up my dream job and travel with three children under the age of five, working full time and going to D.C., then I’m going to reward myself and get a master’s degree,” she told him.

That’s how she discovered UMUC.  It was the late 1980s before online education. The family was now living outside of Bowie, Maryland, and Darrin, who had landed a position as a support contractor with NASA/Goddard Space Flight Center and later became a full-time Goddard/NASA employee as an Aerospace Engineer, learned she could take night classes at UMUC in College Park.

But while working full time and raising three children, she could manage to take only one course a semester.  Finishing her master’s took years.

“I was balancing going to school and small children at home,” said Darrin, who recalled that on one night her husband wasn’t able to babysit while she was in class, so their neighbor Jimmy pinched hit for him.

“The sad part of the story was he heated up the canned SpaghettiOs.  Up till then, my kids did not know you heated them up and had been eating them room temperature!  The kids said, ‘Jimmy makes the best SpaghettiOs.’  That’s how hectic going to school, raising children and working full time was. But from that time on, I had to heat the SpaghettiOs.”

Darrin said her UMUC education was a terrific experience that helped her boost her career while teaching her things that she still uses daily.

“To this date, the quality of the educators I had was hands down some of the best I ever ran into,” she said.  “The course I took in quantitative analysis of decision-making, I probably use those tools every day still. Yes, it took me a long time.  But I always advise people, just get started. Time is passing anyway.”

For the past 20 years, Darrin has held numerous technical leadership and management roles at APL. As the Space Exploration Sector’s managing executive, she makes sure projects are coordinated and running efficiently. How is the research being done? How are ideas being transferred to application?

“I have had numerous opportunities to fly my concepts and ideas, and that has been really fabulous,” she said.

Much of her career has been in microelectronics, in making things smaller, she said. She has overseen the work to create and fly “CubeSats,” satellites no larger than a two-liter bottle that would operate for a year and a half before naturally deorbiting. 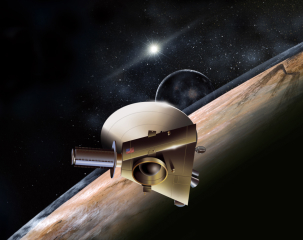 “It’s very exciting when you try to shrink a satellite,” she said.  “It’s a bit like making an iPhone from your old desktop phone.”

Right now, two projects have fixated her attention as they gather break-through scientific information.  One is the Parker Solar Probe, launched in August, that is the fastest manmade object ever.  It was built to withstand the incredible heat of the sun as it makes heliocentric orbits, coming in close to collect data and then moving farther away to send the data.

“This is our star, and we don’t know as much about it as we should.  And we certainly are vitally dependent on it,” she said.  Already the Parker Solar Probe has completed the first of 24 solar orbits, and the information is starting to come back.

Traveling in the other direction is the New Horizons spacecraft. It flew past Pluto in July 2015, before encountering a Kuiper Belt object nicknamed Ultima Thule a billion miles beyond the famous dwarf planet.

And for the future?

“We are proposing the Dragonfly Mission, which is a rotorcraft that would land on Titan, the largest of Saturn’s moons,” Darrin said. Titan’s dense atmosphere and low gravity make it an ideal place to explore by drone.

And the Lab’s space team is conceptualizing an interstellar probe that would travel outside of our own solar system and look back. “It would study the only known inhabitable solar system, and it would redefine how we look at ourselves.” Of course, it would be a long mission, taking decades, she said, “but it is actually fun to think about doing something that would be so historic.”

There’s another side of space exploration that has caught her eye as well.  Of the many books she has written and edited, the one that excites her the most, “Handbook of Space Engineering, Archaeology, and Heritage,” opened up the field of space archaeology.

The book, a collaboration with New Mexico State University archaeologist Beth O’Leary, brought together aerospace engineers and archaeologists to talk about the artifacts of space exploration, the Cold War and technological development that are still “up there,” the likely condition of those artifacts, what artifacts should be preserved and how to preserve them. 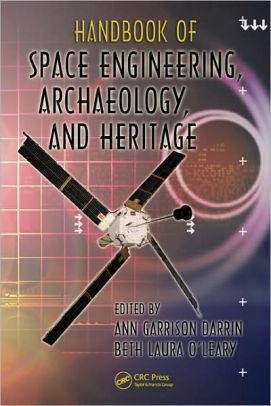 Some of the objects could be retrieved. Others should remain where they are.  And, certainly, the lunar landing site must not be disturbed, Darrin suggested. The Handbook led to space archaeology being accepted as a field of study by the American Society of Archaeology.

“My first early reader my father brought home when I was four was called ‘Ann Can Fly,’” she said.  “It was a book about a little girl whose father took her to the airport and took her flying and she got to hold the steering wheel.”

While Darrin does not have a pilot’s license herself, she thinks of all the spacecraft she has helped send soaring around the solar system.

“I fly things in space,” she said. “How exciting is that.”