With the job market booming and U.S. military veterans returning home looking to succeed as civilians, University of Maryland University College (UMUC) introduced itself Oct. 17 as a new member of The Chamber of Commerce for Greater Philadelphia to the city’s regional business community—and as a premier education provider for companies seeking to hire vets.

“Right now, in this economy, there are more jobs than there are workers,” said Rich Zeoli, host of the Rich Zeoli Show on WPHT-AM 1210 in Philadelphia, who served as emcee of the breakfast event held at Citizens Bank Park, home of the Philadelphia Phillies baseball team.

“You want to make sure you have the top talent,” he said. “The qualities of loyalty and honor and discipline [that veterans bring to a job] are all qualities you want in your employees.”

UMUC, which has more than 800 students in the Philadelphia area as well as about 500 alumni and hundreds of faculty members who live in the region, showcased at the event its 70-year history of educating adult students, military personnel and veterans.

In addition to the efforts as a member of the Philadelphia Chamber, UMUC launched a major advertising campaign in June in the Philadelphia market to attract new students to the university’s workforce-relevant academic programs, including those in cybersecurity, data analytics, business, homeland security and other in-demand disciplines.

In 2017, UMUC became the education partner of Philadelphia-based Entercom—a media and entertainment company that owns more than 235 radio stations across the country—on ConnectingVets.com, a nationwide digital platform that provides essential information and analysis for our military veterans and their families in areas including employment, health care, personal finance and education. 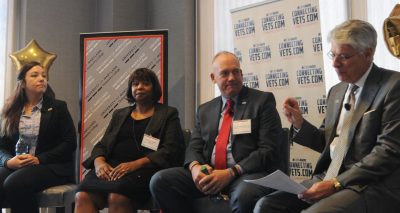 The university teamed with Entercom to host the breakfast for business leaders, including having Entercom Senior Vice President Phil Zachery moderate a panel featuring Lauren Warner, who was selected in June as one of six caregivers of severely injured servicemembers to receive a Pillars of Strength award—a full scholarship to attend UMUC—a program supported and managed by The Blewitt Foundation and the National Military Family Association in association with the university. Other featured panelists were Emma Garrison-Alexander, vice dean for cybersecurity graduate programs at UMUC and retired Army Col. Keith Hauk, a 29-year veteran and graduate of the U.S. Military Academy, who is now an associate vice president for veterans’ initiatives at UMUC.

Retired Army Gen. Lloyd “Milo” Miles, who is now UMUC’s senior vice president for Global Military Operations, recounted in his keynote address how the lessons he learned during his three decades in the military taught him life lessons that are still important.

As a young lieutenant, he thought his West Point education had taught him how to place machine guns in a defensive position, he said.  But the veteran sergeants in his platoon had to control their laughter when they got a look at where he had placed his guns. He had positioned them by looking at the terrain while he was standing upright. The sergeants showed him that by lying flat on his stomach behind a machine gun—as a machine gunner would be positioned—the terrain looked entirely different.

The same ‘from-the-other-person’s’ perspective is true when thanking veterans for their service, Miles said.

“The real way that you show your appreciation is to give them a job . . . is to hire them,” he said. “That’s how you make a difference. And don’t look at your strategic plan . . . not from standing up behind the guns as I did, but [by] getting down on the ground where you might find that the terrain that hinders veterans is actually quite different from that perspective.”

Warner, a U.S. Army veteran who is also the caregiver for her wounded veteran husband, said her UMUC education is building on her military experience to prepare her for the workplace.

“The experience I got in the military is going to help me, but I needed something that would make me more competitive in the workplace,” said Warner.

“With the experience I got in the military and the master’s program I am going through, the two will go well hand in hand and allow me to be more successful and excel in my field,” Warner said.

It is often thought that military training instills the determination and on-task focus—the grit—to muscle through under tough circumstances and “get it done.” That, suggested Garrison-Alexander during the panel discussion, is how students coming from a military background approach their coursework.

They tend to look at the educational experience much differently than civilian students do, she said. “Our students are very well prepared. They come to our classroom very serious about education. They are very sacrificial,” Garrison-Alexander said.

Adept at juggling family, work and other responsibilities, student veterans and servicemembers are going to do what they need to do to get the work done, she added.

Leaving the military and transitioning to civilian life is daunting for a veteran, said Hauk, the retired Army colonel.

“I served in combat, but one of the scariest things I faced was getting out of the military after 29 years,” he said. “I believe you can take someone who is a veteran and train them to do just about any job you want them to do,” added Hauk, who initiated a presentation of challenge coins to all event attendees.

Challenge coins are used in the military to acknowledge members of a unit for noteworthy accomplishments or achievement in support of that unit or its members.

“On behalf of University of Maryland University College, please accept as a token of our appreciation—and [as a] reminder of the role that veterans can play in the success of your companies—these challenge coins, with our thanks for your commitment and your attendance here today,” Hauk said.