Speaking for all six recipients of this year’s Pillars of Strength Program scholarships, Justina Knoefler said the award was a godsend for her and her family, and she wants “to be one of those women that you can use as an example of success, honor, strength and integrity.”

In a ceremony at MGM National Harbor June 29, caregiver awardees were cited for their sacrifices in putting their own lives—often their own careers—on hold to care for their loved ones who have returned from active military service with debilitating physical wounds and psychological injuries.

“The Pillars of Strength scholarship is highly coveted among caregivers,” Knoefler said.  “It offers us a fighting chance we can contribute to our families. There are so many caregivers who are in need, and a college education is the only hope their family has for surviving, let alone thriving.”

Including these latest recipients, the Pillars of Strength Program has awarded a total of 22 scholarships since its inception in 2013 offering free tuition to complete a University of Maryland University College (UMUC) degree.  Two past recipients already have graduated, and three more are expected to complete their degrees in the next academic year.

“Seldom do we have an opportunity to reach out and touch lives so directly and so profoundly as we do with the Pillars of Strength scholarship program,” Miyares said.

Pillars of Strength scholarships are sponsored by the Blewitt Foundation, the National Military Families Association and UMUC to pay tribute to caregivers who often dedicate themselves to years of tending to the needs of their returning warriors while, at the same time, financially supporting their families.

Richard Blewitt, who founded the Blewitt Foundation and created the Pillars of Strength scholarship program, said that six was a record number of awards given in a single year and momentum is building to offer even more.

UMUC Alumnus and Maryland businessman David Welch has donated $25,000 to the cause. Baltimore Ravens Representative Chris Wack was on hand at the awards ceremony to pass out Ravens gear and goodie bags to scholarship recipients. The Baltimore Ravens organization has contributed $25,000—one full scholarship—to The Pillars of Strength Scholarship Program fund. And such organizations as the Purdue Foundation, Washington Nationals and Washington Redskins are contributing, too, Blewitt said.

“There is no other program like it in the United States,” he added. “We are just beginning to fill a void that has been needed for a long time.”

In her remarks during the ceremony, Knoefler recounted that she first met her husband, Curtis, when they were in high school in 1986 and they became best friends. But each went their separate ways.

Knoefler’s husband Curtis with his son

Curtis joined the Army.  They both married others and raised families. Knoefler said she dropped out of nursing school to follow her husband’s career and became a full-time church and community volunteer.

When Curtis was shot in the chest by an Iraqi sniper, he returned home on life support. His marriage fell apart just as Knoefler’s marriage was collapsing. The two reunited to share each other’s troubles, she said.

“If you had told me 32 years ago I would be living in Maryland with Curtis as his sweetheart and caregiver, I would have told you that you were stark-raving mad,” Knoefler said. “There isn’t a manual detailed enough to prepare you to be a caregiver for a wounded warrior. I was a little tiny minnow in this huge ocean of military life.”

Like many volunteer caregivers, Knoefler receives a small federal stipend for her work. But the stipend is becoming harder to get, she said, and many caregivers fear it will disappear altogether, making it even more difficult to support a family.

Knoefler said she wanted to return to her life as a professional in community service.  But all of her job applications ended in rejection because she did not have a college degree. So she took out the college loans necessary to graduate from a community college with a double major in social work and psychology.  But the student debt was straining her relationship with Curtis.

“I was told to look at UMUC, and that’s where I found the Pillars of Strength scholarship,” Knoefler said. “Being awarded the scholarship will give me the opportunity to connect my identity as a caregiver and that as a woman who is dedicated to helping others in a professional environment. I want to use my talents and experiences to help and encourage others as all of you are helping and encouraging me.”

She plans to augment her skills by completing a UMUC degree in communications. 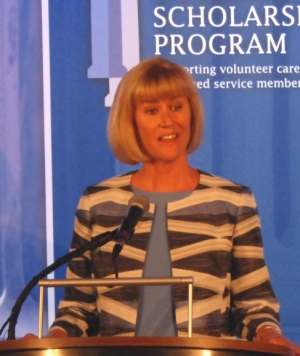 Kelly Wilmeth, UMUC’s Vice President of Stateside Military Operations, oversees the scholarship selection process. Working closely with the National Military Family Association, Wilmeth spreads the word among members of the caregiver community that they can apply for these scholarships between November and March.

“Reviewing the applications is heartbreaking but also inspirational in seeing the sacrifices they have made and their determination to improve their lives through education and their continued desire to give back to their communities,” she said.

About the 2018 Pillars of Strength Scholarship Recipients

Select a recipient’s name to learn more about that awardee’s story. Along with Justina Knoefler, this year’s scholarship recipients are:

About the Photo Collage

About The Blewitt Foundation

The Blewitt Foundation supports military families experiencing severe injuries and invites financial support to assist the foundation in carrying out its mission for special men and women who are suffering—and who, with their families, have sacrificed so much for all of us. Our mission is based on the belief that military family members serve, as well.

The National Military Family Association is the leading nonprofit dedicated to serving the families who stand behind the uniform. Since 1969, NMFA has worked to strengthen and protect millions of families through its advocacy and programs. They provide spouse scholarships, camps for military kids, and retreats for families reconnecting after deployment and for the families of the wounded, ill, or injured. NMFA serves the families of the currently serving, veteran, retired, wounded or fallen members of the Army, Navy, Marine Corps, Air Force, Coast Guard, and Commissioned Corps of the USPHS and NOAA. To get involved or to learn more, visit www.MilitaryFamily.org.

A pioneer in distance education since 1947, University of Maryland University College is a world leader in innovative education models, with award-winning online programs in workforce-relevant areas such as cybersecurity, biotechnology, data analytics, and information technology.  UMUC offers open access with a global footprint and a specific mission—to meet the learning needs of adult students whose responsibilities often include jobs, families, and military service. Today, UMUC is harnessing the power of learning science and technology to deliver high-quality education that is accessible, affordable, and valued. UMUC is a constituent institution of the University System of Maryland (USM) and governed by the USM Board of Regents. UMUC was #1 in Military Times’ 2018 Best for Vets ranking of online and non-traditional schools.

Located in an unrivaled setting, MGM National Harbor offers stunning panoramic views of the eastern shore of the Potomac River in Maryland. The $1.4 billion LEED® Gold Certified resort, which opened December 8, 2016, sits a short distance from Washington, D.C. to the north and historic sites, including George Washington’s Mount Vernon estate across the river in Virginia. The 24-story, 308-room resort features premier amenities and experiences for locals as well as visitors from around the world including a dynamic casino with over 125,000 square feet of space that includes slots, table games and poker; a world-class spa and salon; an entertainment theater with flexible seating for up to 3,000; high-end branded retail; 50,000 square feet of meeting space; and restaurants from renowned local, national and international chefs. MGM National Harbor is owned by MGM Resorts International (NYSE: MGM). For more information, visit mgmnationalharbor.com.