When Priscilla La Delfa crossed the stage to receive her MBA degree at University of Maryland University College (UMUC) graduation ceremonies in Ramstein, Germany, her father and stepmother were close at hand. Very close at hand.

You’ll find links to additional UMUC Europe Commencement 2018 coverage at the conclusion of this feature story.

Joseph La Delfa and Cinzia Giarrizzo also received business degrees at the same April 28 ceremony, an educational hat trick for the family who lives in Sicily. Although the alumni ranks at UMUC include other parent-and-offspring overlaps, a triple graduation on the same day is a rarity.

The cake the new graduates cut at a family celebration after the ceremony contained all three names but Priscilla, with a laugh, said her first reaction to the triple graduation had been momentary dismay.

“I thought, ‘Wait. This was my dream, my day.’” However, she quickly embraced the idea of walking at the same time as her parents. To make that goal happen, Giarrizzo had to double up on her last two classes to complete the r 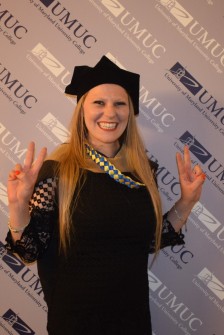 equirements for her Bachelor of Science program in management studies.

It was late last year when the family suddenly realized they were eligible for the same graduation ceremony.

“I received my email invitation to walk,” said Priscilla, who has an undergraduate degree from Kore University of Enna, in Sicily. “My father said ‘Yes, me too.’ Then my stepmother said, ‘We can all walk together.’”

In the months that followed, they kept one another motivated and focused on their studies so the Ramstein coup was possible. “As it [graduation] got closer and closer … there was this attitude that you don’t start lagging behind,” Priscilla said

Although it was a first UMUC degree for each of the three, they were no strangers to the school. Joseph is a UMUC associate professor, teaching computer studies and math to servicemembers at Naval Air Station Sigonella in Sicily. Like his daughter, he received an MBA at the Ramstein ceremony, adding to his bachelor’s degree from St. John Fisher College and a Master of Science from Bowie State University.

After so many years on the teaching side of the table, Joseph said it was “exciting” and “interesting” to study online. “When I did my [master’s] degree in the late 1990s, I had to    get in a car to go to class or do research.” He credited Priscilla for piquing his interest in the MBA program.

“My daughter started a few courses before me,” he said. “She was in the new ELM curriculum and enjoying it so much. It sounded interesting.”

The Enhanced Learning Model, or ELM, shifts online instruction toward project-based education and away from the more traditional online model in which students read, write papers, post to discussion boards and take exams.

Joseph, who has taught for 33 years, found an extra benefit from being a student.

“I think it’s something all professors should do to get a better insight on teaching,” he said, adding that he estimates he has taught more than 480 classes and in excess of 10,000 students. “Maybe you’ll see things you can do better.”

All three members of the La Delfa-Giarrizzo family pursued their degrees while working. Joseph was teaching, Priscilla managed the Taco Bell at the Sigonella base and Giarrizzo worked part-time for their local city government. Priscilla would like to continue her studies, aspiring to a doctorate in management.

Two days before the three walked at commencement, the graduation celebration expanded from an immediate-family to an extended-family event. Priscilla’s fiancé, sister Angela, brother-in-law and 84-year-old grandmother, who all live in Sicily, too, flew to Germany to join the party. And a cousin in Germany who owns a restaurant and bed-and-breakfast in Otterbach, a small town five minutes from Kaiserslautern center, closed the B&B to all but the family for the duration of the festivities.

As a plus, the neighborhood where the B&B is located is home to many Sicilians from the La Delfas’ hometown.

“We’re all celebrating,” Joseph said. “We never thought it would happen like this, all at once. It’s a great event for our family.”

Meanwhile, Priscilla reflected on the fact that all three of them now have degrees in the same field. “Maybe this means we need to start our own business,” she said.