A walk through the exhibition “Joseph Sheppard: Highlights from the UMUC Collection” at the Leroy Merritt Center for the Art of Joseph Sheppard at University of Maryland University College is almost like experiencing a comprehensive articulation of the history of art.

Upon entering the show, which is on display through October 2018 in the Dorothy L. and Henry A. Rosenberg Jr. Painting Gallery, Sheppard’s “Watermelon and Fruit” (1988) evokes lush 17th-century Dutch still-life paintings. Farther on, a series of anatomical drawings—their completion spanned 1973-74—recall the classical skeletal drawings of Michelangelo or Leonardo da Vinci. Two Grand Canyon paintings resemble 19th century Hudson River School landscapes. And a powerful series on the Seven Deadly Sins, which Sheppard created in the 1960s, is worthy of Thomas Hart Benton or any number of other muralists.

Sheppard, who led a gallery talk during the exhibit’s official opening, was seeing this compilation of his work for the first time.  As he strolled past paintings he hadn’t viewed in decades, the Maryland artist, who was born in 1930, revealed that his favorite subject is the human figure—notoriously the most difficult subject to draw or paint. “In order to do the figure well, you have to know anatomy,” he said, noting the drawings of skeletons.

In his 15 years as an instructor at Maryland Institute College of Art, Sheppard had a lot of opportunities to draw the figure as he taught. “If I had 20 students, I’d draw the figure 20 times as I went around,” he said.

But these days, the painter, who lives near Florence, Italy, and in Baltimore, isn’t drawing from life. “I draw mostly from memory,” he said. 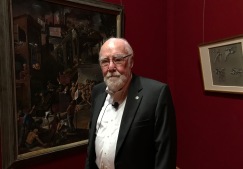 Standing before his series on the deadly sins―envy, greed, sloth, gluttony, anger, pride, lust―which commands three walls, Sheppard shared some of his research. The sins aren’t biblical, he said, but Pope Gregory I developed the concept in the sixth century. “They’re very much like the 10 Commandments,” Sheppard said, noting that both the poet Dante and painter Pieter Bruegel the Elder mined the sins deeply in their art.

“It’s just the perfect subject for a figure painter to do,” Sheppard said. And he’s right. The figures in “Sloth” are so lazy that they appear statuesque rather than animated, and the people fighting over a chunk of dollar bills in “Greed” engage in a tug-of-war that is wonderfully cinematic. “Anger” has all the gory dramatic flair of the HBO show “Game of Thrones.”

“I haven’t seen these paintings for a long time,” Sheppard confided. “Some of these are from when I was in art school.”

Soon he was standing before “Parade” (2000), a large work that takes over an entire wall. Dogs trot in the foreground, as trumpet players and baton twirlers march from left to right. Children who stand in the middle of the parade display emotive expressions. 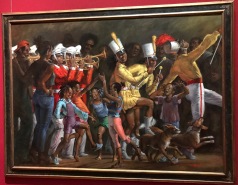 “It’s something I experienced as an art student. I lived on the edge of the black ghetto, and I’d hear the music every night,” Sheppard said. “I’d go over there, and there’d be these kids practicing, and that’s what inspired this painting.”

When Sheppard added that one of his greatest inspirations was the Baroque Flemish artist Peter Paul Rubens, it’s easy to see why, given the humanity he’s able to capture in his figures—old and young alike.

“Parade” is among UMUC Arts Program Director Eric Key’s favorites in the exhibit. “I like the energy and expression of the piece,” he said. “That’s what Joe is masterful at . . .  capturing those expressions.”

The depiction is so convincing that one can almost sense the figures marching off the canvas. “You just feel like they’re right here,” Key said. “That’s what realism is about.”

Sheppard’s realistic treatment also caught the eye of UMUC President Javier Miyares. “Joe shows us the world in astonishing detail,” he said at the exhibit opening. “Together,” Miyares said of the paintings, “they stand in tribute to a life committed to art, to exploration, and to truth.”

Henry Rosenberg, in attendance with his wife Dorothy—donors and namesakes of the UMUC gallery displaying the exhibit—said he can’t see enough of Sheppard’s work. “Every time I see it in the galleries or in other places, I get all excited all over again. He is a real, real talent.” Rosenberg said of Sheppard.

The Rosenbergs have several of Sheppard’s works in their home, and they visit the artist and his wife at their home in Pietrasanta in Tuscany. Michelangelo famously used the town’s marble, Sheppard said proudly. “The mountains look like they have snow, but it’s marble,” he added.

Asked what he hoped visitors would take away from the show, Rosenberg said, “Come see what’s going on, because it doesn’t go on forever. This is special.”