Sixty years ago this August 7, just days after General Lyman L. Lemnitzer, commander-in-chief of the U.S. Far East Command and the United Nations Command, signed an agreement to launch the University of Maryland’s Far East division, he sent a cable to University President Wilson H. Elkins that ended this way:

“It may now truly be said, in view of your educational activities in Europe and Asia, that ‘the sun never sets on the University of Maryland.’”

Today, University of Maryland University College (UMUC) is a separate institution in the University System of Maryland, and to mark its 60th anniversary in Asia, UMUC President Javier Miyares noted now much has been accomplished in educating U.S. military personnel and other students throughout Asia and the Pacific.

“We have sent professors into the thick of the fighting during the Vietnam War, taught students on remote islands, provided strong education programs from Seoul to Tokyo, from Bangkok to Taipei to Woomera in Australia,” he said. “We even survived a volcano in the Philippines. And now we have expanded into Siberia.

“But one thing we should never lose sight of is the daring and foresight it took for the University of Maryland to commit to providing this far-flung education when other universities had failed.”

There are challenges associated with establishing an education program in a new country—let alone in a country at war—and in 1950, when the military invited the University of Maryland to expand its fledgling European program into Asia, university leaders didn’t pursue the opportunity. The job went to the University of California, but logistical challenges interfered, and the program was discontinued in 1956.

Again, the military asked Maryland to step in and, this time, the answer was yes. By then, Maryland had an established record of providing solid academic programs to troops stationed in Europe, and the university was the obvious choice.

On September 17, 1956, with less than a month to prepare, Maryland launched classes at 42 military education centers in Japan, Okinawa, and the Republic of Korea. More than 1,700 people signed up for 82 courses in 27 subjects. The cost? Ten dollars per credit. 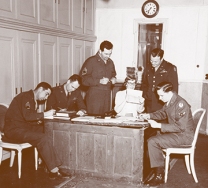 Sharon Hudgins, who authored UMUC’s official history book, wrote that despite a variety of challenges, many of them unique to what was initially known as the Far East Division—troop withdrawals in one country; shortened tours of duty in another; typhoons; military field maneuvers; the temporary suspension of the program in one location, and the opening of a new program on short notice in another—the division thrived and enrollments grew steadily.

By 1959, more than 500 students were enrolled in Seoul, South Korea, alone, making it the largest single overseas center. Less than a year after the program was established, students already were referring to their instructors as “portable professors,” Hudgins wrote.

One of those portable professors was Joe Arden, who went on to serve as director of the Asian program from 1975 to 1981. He recounted a term in Thailand in which he taught in Bangkok on Monday and Wednesday and then at a base on the seacoast on Tuesdays and Thursdays.  It was a four-hour drive each way.

“Several students said to me, ‘We really feel good [that] you would . . . [travel] four hours to teach us tonight,’” he said.

Julian Jones, who served as director of the program from 1981 to 1990, believes that Maryland succeeded where the University of California did not because of the autonomy given to program leaders.

When he was given the assignment, Jones said that he was told to “act like he was president of a small college.” That allowed him to make quick decisions without having to first seek approval from university leaders in Maryland.  Given how slow and costly communications were at the time, the Far East Division flourished in part due to that independence.

“This program covered 10 million square miles of Asia and the Pacific,” Jones said. “The distances are vast, and the opportunities for [U.S. servicemembers stationed] on a lot of the tiny locations were nonexistent.”

And no location was too small. A program was established on Kwajalein Atoll, an island not much more than a sandbar halfway between Tokyo and Hawaii in the Marshall Islands, in the middle of absolutely nowhere, he said. Even more remote was a location on Diego Garcia, an atoll in the middle of the Indian Ocean.

“We had students out there desperate for any diversion,” Jones said.  “It was easy to expand.”

At the same time UMUC was sending faculty to these remote locations, the university was also bringing educational opportunities to troops serving in challenging settings like the demilitarized zone in Korea.

But those challenges paled in comparison to what the university faced when it was asked to send professors into Vietnam. By 1963, there were enough U.S. personnel in the country to warrant an education center in Saigon. Six years later, at the height of the war, the Far East Division offered courses at 24 military bases in South Vietnam with enrollments totaling 11,000.

Yet the call to service was strong, and the university had no trouble recruiting faculty. Some even opted to stay extra terms in the war zone.

At one point, the division opened a program in Laos for U.S. military personnel, even though the U.S. government did not officially acknowledge that American personnel were operating there.

In the chaos of the sudden evacuation of American forces in the fall of Saigon, Robert Schoos, Maryland’s last faculty member there, made his way to the U.S. embassy and was among the last Americans helicoptered out.

Over the years, the Far East Division became known as the Asian Division, and later simply as UMUC Asia. Always, though, flexibility was the watchword. When locations in Vietnam, Laos, and Thailand closed, and the American presence in Taiwan was scaled back, the program expanded to Hong Kong, Australia, and the Philippines.

With the rise of the Internet, UMUC’s flexibility allowed it to take advantage of new opportunities, said Paula Harbecke, who directed the Asian program from 1990 to 1996.

“In the early 1990s, we had two classes in Christchurch, New Zealand, that fed online programs to a couple of students stationed in Antarctica,” she said. “With UMUC becoming one of the first universities offering online education, the Asian Division became a natural place for distance education and online learning.”

And, as relations with the Soviet Union thawed in the late 1980s, UMUC launched tours to the “closed” city of Vladivostok, in the Soviet Far East, and to Irkutsk, capital of Eastern Siberia near Lake Baikal. These led to formal contracts that called on UMUC to provide programs for Russian university students at the Irkutsk State University and Baikal International School of Management, as well as at Far Eastern Federal University.

When he delivered a commencement speech at both of the Russian universities in 2013, President Miyares summed up what UMUC’s 60 years in Asia had produced:

“You here today exemplify UMUC’s global reach,” said Miyares. “Our partnership with you sets the standard for our desire to reach students everywhere. By extending beyond borders and across cultures to study with faculty members and fellow students from UMUC, the world has become your classroom. You are no longer limited by any geographical constraints.”

In 2015, UMUC was once again awarded a U.S. Department of Defense contract to continue providing instruction to U.S. troops in the Asia-Pacific region. And so, for the foreseeable future, the university will continue its proud history of service in Asia, and wherever U.S. military personnel are called to serve, UMUC’s “portable professors” will be right there with them.

One thought on “UMUC Celebrates 60 Years in ASIA”