More than 400 University of Maryland University College (UMUC) Alumni gathered in-person and online at Adelphi, Maryland, in June for the 26th Alumni Reception and Awards, to demonstrate the many ways alumni worldwide make their mark through their personal and professional achievements.  Six outstanding alumni volunteers among them were honored for their exceptional service to UMUC. 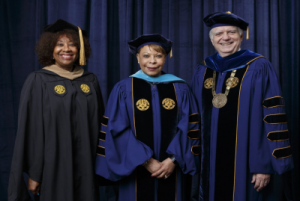 Gooden earned both her Bachelor of Science in Business Administration and MBA from UMUC, and in 2005 the university awarded her an honorary Doctor of Public Service degree in recognition of her service to the community and to higher education.

She serves on numerous executive boards, including the Armed Forces Communications and Electronics Association International; Information Technology Association of America; University System of Maryland Board of Regents; University of Maryland’s A. James Clark School of Engineering and Robert H. Smith School of Business’ Center for Electronic Markets & Enterprises; University of Maryland, Baltimore County; Prince George’s Community College Foundation; Maryland Business Roundtable for Education; and the Executive Leadership Council. Gooden also serves on the Executive Board of Eisenhower Fellowships Board of Trustees.

In 2010, she was appointed to the National Security Telecommunications Advisory Committee by President Barack Obama. 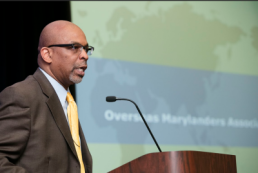 Lawrence Gross, CIO for the FDIC

The Executive Business Leader Award honors those who serve in a leadership role in their community and promote involvement in the university.

The 2016 awardee was Lawrence Gross ’95 and ‘15, for his professional contributions to the information technology sector.

Gross, who is Chief Information Officer (CIO) for the Federal Deposit Insurance Corporation (FDIC), provides leadership to the Division of Information Technology and the Information Security and Privacy functions and operations.  He has more than 25 years of combined federal and military service in progressively more responsible technology-related positions. 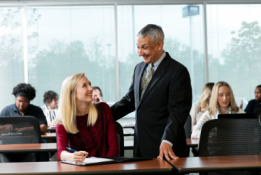 He has a long history of volunteerism―he has assisted numerous nonprofit organizations since 1992. And for more than 12 years, Alonso has coordinated logistics for wishes that have been granted, in his capacity as a “Make-A-Wish” foundation volunteer.

In addition, three alumni received the Alumni Achiever Award, which pays tribute to those who have made a significant contribution to supporting the university’s mission. 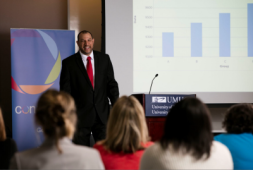 William Eric Linzey ’12, MBA, was honored for both his commitment to UMUC’s Career Mentor Program and his volunteer efforts on various UMUC alumni events throughout the year. 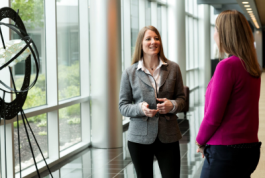 Jessica Mitchell ’00 was also honored for her commitment to UMUC’s Career Mentor Program―over a period of less than a year she has mentored five students―and for her participation in UMUC’s Government Week event.

Mitchell, who earned a Bachelor of Science in Information Systems Management from UMUC, is an IT security specialist at the Bureau of Labor Statistics. She has worked there in a variety of capacities including user support and network administration for the past 13 years. 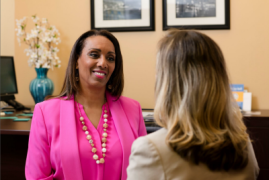 Laurie Sayles Artis ’10 and ’11 received the Achiever Award because of her commitment and participation in various UMUC initiatives, including the university’s Government Week event.

She graduated from UMUC with a Bachelor of Science in Social Science, a minor in Strategic Management and Entrepreneurship, and a Business Project Management Certification.

View the event summary in Alumni News  for additional images of the awardees as well as Event Photos, Military Thank-A-Vet Photos and #ILoveMyUMUC Photos.