When Jacqueline Barber received her Bachelor of Science in Cybersecurity from University of Maryland University College (UMUC) on May 14, she said she checked off her “next bucket-list thing to do.” Graduating with her daughter, Tiffinie Jennings, who received her Bachelor of Science in Business Administration on the same day during the same UMUC commencement ceremony―well, that was a bonus beyond imagining.

Most UMUC graduates can relate to the familiar, jagged path that Barber and Jennings, who are pictured in the cover photo, followed to attain a college degree. For both, higher-education plans took a back seat to work and raising a family.  With the family grown, Barber thought it was time to give college another try.

“It was new, exciting, but going back to school was really kind of difficult at first because the technology has changed, and it was [hard] to get in the groove of everything.” Barber said.

Jennings, who works in grants and procurements for the State of Maryland, was reintroduced to school when she pitched in to help her mom get through her courses.

“I thought, you know, if I’m spending this time helping her, I can really do this myself.  It can be done. I was just very inspired by my mother.”

So, Jennings enrolled at UMUC. “And the further I went and the further she went, I thought, it will be exciting to be able to graduate with my mom, because I really felt like I owed this to her,” Jennings said.

With nearly 10,000 UMUC Class of 2016 graduates worldwide, it’s easy to image that a few more than Barber and Jennings might be related. In fact, more than 100 graduating students in this year’s class shared the experience of walking the stage to receive their diploma with a family member.

Dalia Zabala, who along with her husband, Larry Lecompte, received an MBA at the same UMUC stateside ceremony at the Xfinity Center in College Park, Maryland, described the shared experience this way: “Oh, well, [there were] long days and late nights, but doing it with my husband, we had very romantic weekends with, you know, books and laptops for two years.”

Rachele Love, a special education paraprofessional from Wiesbaden, Germany, could relate to the time crunch while finishing a demanding load of upper level online classes for her bachelor’s in psychology.

“Your day consists of wake up, go to work, come home, take a nap, do homework, skip dinner,” she said.

She eyed her husband, Andrew Love, an Army master sergeant who earned his bachelor’s in business and said he misses home-cooked meals.

Kristina Manns, Master of Intelligence Management, who graduated with her husband Gabriel, Master of Science in Healthcare Informatics Administration, said having that second pair of eyes reviewing your work and making sure it’s correct for the professor was invaluable. “Because you don’t get any second chances when you submit a paper,” she said.

They “definitely” supported each other with paper writing, research, projects, finance, especially the management classes, she added. And they kept each other on top of things. No sloughing off.

“Oh yeah.  We got on each other.  You know, we kept each other accountable throughout the whole process. Tell the friends we can hang out later, but, you know, it’s more important that we get this done right now.  And now we’re here today,” said Gabriel Manns.

Carolyn Gipson worked hard for six years as a part-time student to earn her bachelor’s in business administration from UMUC.

“I wanted to graduate from here. UMUC has a great reputation and I wanted to be part of that,” she said.

Her daughter, LaKeisha Gipson, bachelor’s in cybersecurity, enrolled “right after the military because my mom went here and said it was a good school.”

And now that they’ve graduated together? “I’m feeling great,” the Gipsons beamed.

It had been 16 years and three children since Christopher and Alina Holmes earned their undergraduate degrees.  On more than one occasion Christopher, an Air Force veteran, approached Alina with this idea that the time was right―was perfect―for the two of them to go back to school.

To which, Alina said, “You’re crazy! But when he said with his soft, beautiful, brown eyes, ‘Let’s do it together.’ Well, that was hard to say no to.”

Still, she resisted.  But Christopher, who knew of UMUC from his military background said, “Okay, well we’re just going to sign up, and let’s see her say no then.”

“And that’s what he did, and here we are,” she said. And it worked out fabulously.

They filled in each other’s gaps. “Where I would misinterpret something, he would say, ‘well actually you know, maybe you should read it this way,’” she said.

With three kids, a full-time job and such a heavy reading load, Alina and Christopher could rescue each other if something was missed. “We actually helped each other a lot that way, and just bounced off ideas and questions, kind of like being partners in a business,” she added.

Their education partnership was also a source of inspiration for their children. “They would say, ‘Hey you’re doing your homework. What are you working on? And the dialogue we would have, and seeing us work together, I think helped them. It inspired them. I could tell,” Alina Holmes said.

Christopher offered that some might question the wisdom of both parents heading off to graduate school at the same time. But his is a “get-‘er-done” attitude.

“I felt that it was better to do it at the exact same time, even though it was pulling us away from some of our normal things to do, we could also support each other,” he said.

Then, once it’s done, it’s done. “And we could come up together and celebrate, which is important. Because, you know, you’ve been out of school for so long. And then, all of a sudden, you accomplish something like this, and you really just want to take the time to truly celebrate and enjoy it,” he said.

Monique Wardrick, bachelor’s in communications, was student speaker for the Saturday morning, May 14 stateside ceremony, and is one-half of another husband and wife graduating team.

She and spouse Dermaine Wardrick, who earned his MBA, know a great deal about the many ways life pulls against UMUC’s adult learners as they work to balance family and career responsibilities, and in very many cases, military service, too.

They also understand how loved-ones traveling the road to a degree together can sustain and lift each other when the road seems impossible to navigate. Learn more about their story.

But Monique would be the first to say that family members don’t need to study and graduate alongside you to provide their full measure of support. She began her commencement address by thanking, on behalf of every graduate, the family members and extended family community―friends, professors, advisors, neighbors, third cousins twice removed―who helped graduates achieve this milestone. Listen to Monique’s commencement speech. 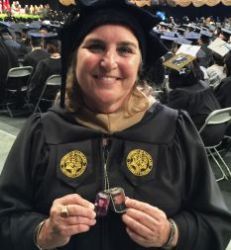 And so, Theresa Mills, MBA, carries dog-tag photos of her sons, who support and sustain her always.

She is a Blue Star mom for her 21-year-old son, Jacob, an active-duty Marine, who joined the Corps right out of high school.

Jacob’s brother Gene had done the same.  Mills is a Gold Star mom for him―Gene was killed in action in Afghanistan on June 22, 2012. He also was 21.

Jacob was not able to attend his mom’s commencement. But, Mills said, both sons are ever with her in spirit.

“They were my inspiration to go back to school to get my degree, and to get some confidence back.”